Kinases play a fundamental role in human biology, controlling many cellular processes through protein phosphorylation.  Dysregulation of kinase function leads to diseases like cancer, inflammation and diabetes.  Kinases are very similar in their active site architecture, which leads to cross-reactivity amongst kinase targeted small-molecule inhibitors.

It is important to determine the affinity and selectivity of such inhibitors to minimize off-target effects while optimizing desired selectivity profiles.  Luceome’s KinaseSeeker™ is a high throughput screening and profiling service for evaluation of compounds against a panel of kinases.

Luceome’s kinase assay technology utilizes the luciferase fragment complementation, in which re-assembly of a split-protein leads to a functional luciferase enzyme and bioluminescence.  In Luceome’s proprietary KinaseSeeker assay, the reassembly of luciferase fragments is mediated by the interaction of a kinase with an active site dependent small molecule probe, where the competitive displacement of the probe by an inhibitor is measured by a change in luminescence signal.  Luminescence readout translates into a highly sensitive and robust assay with low background and minimal interference from test compounds.  The assay is a homogeneous binding assay, which enables rapid kinase profiling in a high-throughput format. 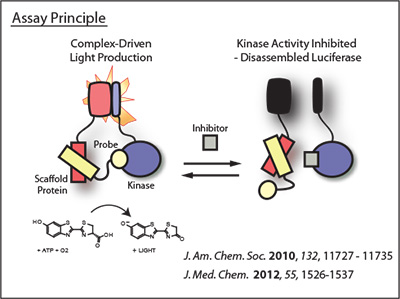 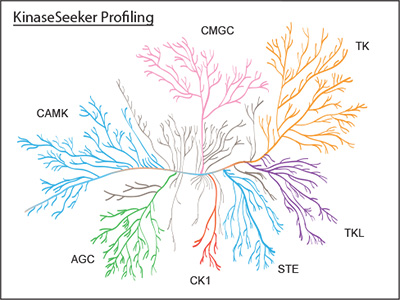 Most existing kinase assays generally use the catalytic domain of a kinase as a surrogate for the native full-length kinase. However, the conformation of kinases and thus ligand binding is regulated not only by phosphorylation of the active site Ser/Thr/Tyr residues but also other regulatory domains within the protein that are often not part of the catalytic domain.  Use of kinase constructs that best recapitulate how a native kinase binds its ligands can provide valuable information, possibly missed by studies with only the catalytic domain, during the drug development process.

For receptor tyrosine kinases (RTKs) belonging to the Eph, KIT, FGFR and PDGFR family, the intracellular juxtamembrane (JM) region, which connects the transmembrane segment to the kinase domain, adopts a helical conformation and bind the kinase domain auto-inhibitory cleft, thereby maintaining the enzyme in the inactivated state.1 Release of the cis-autoinhibition results in destabilization of the inactive conformation and activation of the kinase. In these cases, the drug-kinase interactions depend on the different conformations of JM domain, which in turn impacts the on-target potency and selectivity of the drug.2 Luceome’s panel now includes the intracellular modules (cytoplasmic regions) of several receptor tyrosine kinases to allow evaluation of conformation selective kinase inhibitors (View panel).

In the case of cytosolic tyrosine kinases like the Src family of kinases (SFKs), the Src-homology domains (SH2 and SH3), which lie N-terminal to the kinase domain, help stabilize the inactive conformation of the kinase.  The SH2 binds a p-Tyr residue in the C-terminal tail, while the SH3 binds the linker between SH2 and kinase domain locking the kinase in a closed inactivated state.  Evaluation of Type-I and Type-II inhibitors against the kinase domain versus full-length constructs, is thus very different.  While Type-II inhibitors are expected to bind the two constructs equally well, the Type-I inhibitors are predicted to display differential inhibition, binding the kinase domain more tightly than the closed conformation of the full-length kinase.  Luceome now offers both the full-length Src as well as Src (Y530F), in which the autoinhibition has been released by Tyr-Phe mutation (View panel).

The use of full length constructs can not only guide the decision making process for active site inhibitors, but also enable identification of allosteric inhibitors. Since kinase active sites are highly conserved across the kinome, allosteric sites provide new opportunities for discovering selective inhibitors. For example, an allosteric inhibitor known to bind the Pleckstrin Homology (PH) domain of Akt1 and Akt2,3 displays >80% selectivity for full-length Akt1 over the kinase domain in the KinaseSeeker assay, whereas PKC412 (an active-site inhibitor) has been shown to inhibit both kinase constructs equivalently.4 Hence, allosteric inhibitors that bind in regions distal to the active site, and upon binding stabilize an inactive or non-ATP binding conformation of the kinase can be identified by Luceome’s assay.

Click here to Request a Quote or send an email to info@luceome.com